Skip to content
Tried fresh, human-grade food for your dog yet? 60% Off First Order at Ollie. Redeem Offer

Questions for today: Can dogs eat cinnamon? And is cinnamon safe for dogs?

If your idea of perfect rest and recreation involves cinnamon, sugar, spice, and everything nice, there’s no doubt that it will indeed be a stress-free day.

But, how about if you have a dog who loves to eat people foods as much as you do? Will there be a potential problem?

It’s important to know the answers to these questions, especially if you have a sweet tooth who often bakes using this delicious spice, or if you regularly pass by Cinnabons for some cinnamon rolls takeaway.

Yes, you can it to your pet. However, just like other ingredients that are used in making human foods, you should only give it to your pup in moderation.

There are also two types of cinnamon that you can purchase at most grocery stores: Chinese and Ceylon cinnamon. It’s important that you know which among these two spices is safe for your dog to consume.

Between the two, you should go for Ceylon. This one is safe for dogs because it contains low levels of Coumarin. This organic compound is naturally found in a lot of plants, and it is known to cause issues in dogs when they consume too much of it.

Chinese or cassia cinnamon is loaded with Coumarin, so it’s best to stay away from this spice, which can be easily identified with its dark brown color.

You should also avoid sprinkling cinnamon (cassia) to your baked goods or to any food that you cook at home.

This way, you won’t have to worry about causing health problems to your pup just in case he ends up stealing a bite from your cassia cinnamon-infused food.

Also Read: A Guide To What Your Dog Can And Can’t Eat

Is Cinnamon Bad for Dogs?

Although it’s good news that cinnamon is non-toxic to dogs, it doesn’t mean that you can simply add this sweet spice to your dog’s kibbles or wet food.

Your dog won’t succumb to a fatal condition from eating large quantities of cinnamon, but it can cause uncomfortable side effects starting with an upset stomach.

The Pet Poison Helpline states that large quantities of cinnamon and cinnamon oils can cause digestive issues and skin irritation both in humans and dogs.

It’s also not advisable to let your dog eat baked goods with cinnamon because aside from cinnamon essential oil, and ground cinnamon powder, these delicious goodies might also contain other ingredients that can be toxic to dogs, such as nutmeg and cocoa powder.

Your dog may also cough, choke, and experience difficulty of breathing when he inhales cinnamon powder, or eats a cinnamon stick.

Can dogs eat cinnamon? And is cinnamon safe for dogs?

We’ve mentioned the dangers of adding too much cinnamon to your dog’s diet, so now, let’s find out how much exactly is too much of this spice for your pup.

Based on research, the amount of cinnamon that is considered safe for your dog is dependent on his body weight.

If you have a small dog who weighs about one to ten pounds, you should not give him more than 1/8 teaspoon of cinnamon daily.

On the other hand, if your dog weighs at least 100 pounds, it’s safe to give him up to two teaspoons of cinnamon. But either way, adding cinnamon to dog food or treats should not be started without the consent of your veterinarian.

Moreover, according to the Pet Poison Helpline, most pets experience uncomfortable side effects after consuming more than one teaspoon of cinnamon.

It’s also worth noting that essential oil is more potent, so, a lower dosage can already trigger some issues, especially to smaller dogs.

Additionally, the helpline warns about cinnamon overdose which can lead to vomiting, diarrhea, low blood sugar, changes in heart rate, and liver disease.

Cinnamon and nutmeg often come together in many people foods, especially in baked goods and desserts. However, the problem is that nutmeg is toxic to dogs.

This spice contains the toxin myristicin, which can cause several health issues in dogs, such as abdominal pain, dry mouth, increased heart rate, high blood pressure, disorientation, hallucination, and even seizures.

The good news is that the small amount of nutmeg in these desserts won’t be enough to cause these alarming, and even life-threatening side effects in dogs.

But if your dog ate large quantities of nutmeg by accident, or if you are not aware of how much he consumed, it’s best to take him to the vet immediately while also observing for his reactions.

What Happens If Your Dog Eats Too Much Cinnamon?

Cinnamon is not toxic or fatal to dogs. However, when your pup consumes large quantities of cinnamon, he may experience stomach ache, which can still be uncomfortable.

Nonetheless, you don’t need to panic, because your dog will just be okay. You should also keep an eye on your dog because there’s a chance that he is allergic to cinnamon.

And if he is, he may exhibit irritating symptoms such as mild diarrhea, stomach upset, redness of the skin, respiratory distress (when the powder is inhaled), abnormal heart rate, drooling, lower blood sugar, and even liver disease. If you notice any of these symptoms, you should seek veterinary guidance immediately.

At the end of the day, it’s still best to ask for help from your veterinarian because he might have better recommendations on how to make your dog’s condition more bearable and how he can recover from his symptoms the soonest time possible.

Health Benefits of Cinnamon for Dogs

If your dog isn’t allergic to cinnamon, and when given appropriately, this spice can have many health benefits to your dog.

Diabetic and overweight dogs can also benefit from adding cinnamon into their food. Adding 1/8 teaspoon of cinnamon to your dog’s diet for every 15 pounds of body weight can lower his insulin resistance and help with blood sugar regulation.

Cinnamon is also rich in antioxidants and is considered brain food. It can help dogs against neurological disorders and improve their cognitive functions such as memory.

Additionally, in a study published in the Journal of Animal and Veterinary Advances, dogs who eat cinnamon also experienced improvements in their heart health.

In particular, the dogs in the study who consumed cinnamon exhibited significantly lower blood pressure and decreased heart rate than those who were not given the spice.

Finally, dogs who often have problems with yeast infections can also benefit from the anti-fungal properties of cinnamon.

Keep Your Dog Safe From The Potential Dangers of Human Foods

Is cinnamon good for dogs? Yes, it can be helpful for your dog’s health, but as always you should also be cautious when feeding your dog human foods that contain cinnamon.

As mentioned earlier, most of these dishes and desserts also contain ingredients that can be toxic to dogs, such as nutmeg, chocolates, macadamia nuts, and so on.

Additionally, even when you are only planning to add pure cinnamon powder or oil to your dog’s food, it’s still best to ask your vet’s advice first.

Whenever you introduce anything to your dog’s diet, may it be toppers, or treats, you should always seek your vet’s approval.

You should also inform the people inside your house; especially those who are assigned in the kitchen, to know what foods should not be given to your dog.

You can also tap them to be your extra eyes that can watch over your dog, especially during your Thanksgiving, Christmas, or New Year’s Eve celebration.

There are many ways to incorporate Cinnamon into your pet's diet. However, we have narrowed down the choices for you, check out our selection below. 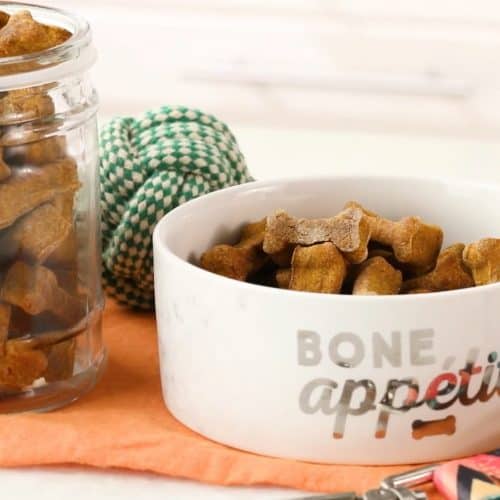 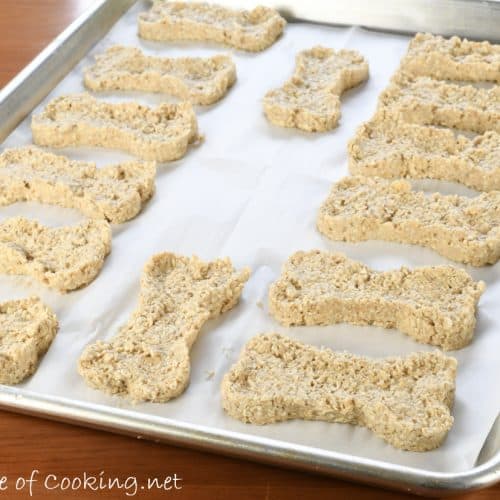 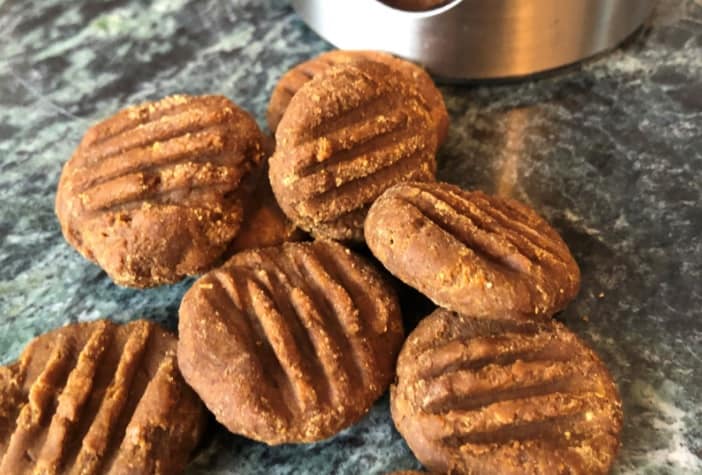 This is a sticky dough but do not add more flour. This dough does not roll out for cut-out treats.

DogFood.Guide is a participant in the Amazon Services LLC Associates Program, an affiliate advertising program designed to provide a means for sites to earn advertising fees by advertising and linking to Amazon.com.

*Amazon and the Amazon logo are trademarks of Amazon.com, Inc., or its affiliates.

Additionally, DogFood.Guide participates in various other affiliate programs, and we sometimes get a commission from purchases made through our links.

DogFood.Guide is a participant in the Amazon Services LLC Associates Program, an affiliate advertising program designed to provide a means for sites to earn advertising fees by advertising and linking to Amazon.com.

*Amazon and the Amazon logo are trademarks of Amazon.com, Inc., or its affiliates.

Additionally, DogFood.Guide participates in various other affiliate programs, and we sometimes get a commission from purchases made through our links.