Skip to content
Tried fresh, human-grade food for your dog yet? 60% Off First Order at Ollie. Redeem Offer

With their distinct crunch, refreshing flavor, and excellent nutritional profile, cucumbers are inarguably one of the most commonly enjoyed human foods across the globe.

And for dog owners like us who are always surrounded by our pups at home, it’s just common to see our canine companions beg for cucumber slices. But, can dogs eat cucumbers?

Unlike cats, dogs are more inclined towards fruits and vegetables considering their omnivorous nature.

However, if they’ve never had a bad experience with a certain fruit before, they would not deter from it. As such, our canine friends can also be susceptible to the dangers brought by some toxic fruits and vegetables.

So, where do cucumbers stand? Are they perfectly safe for dogs or not?

Cucumbers are an excellent, healthy snack for dogs. They are loaded with beneficial nutrients including proteins, vitamin C, vitamin K, magnesium, potassium, and manganese, which are all important components in a dog’s daily diet.

With about 96% water, cucumbers make a refreshing treat for your dog during a hot summer day. Your pooch will certainly love the crunch of fresh cucumbers, and you won’t have to worry about keeping him hydrated under the scorching heat of the sun.

Cucumbers can also serve as a low calorie training treat and a healthy alternative to a single medium-size milk bone biscuit. Compared to the 40 calories of one training biscuit, a one-half cup filled with thin slices of cucumbers only has 8 calories.

In addition, cucumbers are also low in sodium, and low in fat, so you won’t have to worry about unhealthy weight gain when giving them as a tasty treat during your dog’s training.

Are Cucumbers Good for Dogs?

Yes, cucumbers can serve as an excellent healthy treat for dogs. Thinly sliced, diced, or chopped cucumber in bite-size pieces is not just good for us humans, but also our furry friends.

With cucumber’s low fat and sodium content, it can definitely be a tasty and juicy treat that most dogs will love.

Cucumbers are especially good for dogs that are trying to lose weight for health reasons, as their low-calorie count and a good amount of soluble fibers can offer promising results.

But of course, a dog’s weight loss journey wouldn’t be successful without a balanced diet and regular exercise.

Nonetheless, it’s good to know that we can use cucumbers as an alternative to fatty treats that they used to have as rewards. By doing this, we are hitting two birds with one stone.

We are promoting positive behavioral outcomes, especially for treats-motivated dogs, and we’re also helping our pup lose weight or at least not gain too much weight over time.

Moreover, one cup of chopped fresh cucumbers has only about 1 gram of sugar, 1 gram of dietary fiber, and 16 calories.

In addition to cucumber’s low sugar content, it is also believed to help reduce blood sugar levels and prevent complications from diabetes. Hence, it’s also a healthy treat for dogs with this condition, or those under a reduced-calorie diet.

Aside from its hydrating effect, cucumber also has a purifying effect on the body. So, it’s very much helpful in the disposal of old waste and toxins out of the body. And this makes cucumbers a healthy food for your dog’s liver, bladder, kidneys, and pancreas.

Cucumbers can also help promote regular bowel movements due to their high water and fiber content. And they also contain pectin, a soluble fiber known to increase the frequency of bowel movement, which is particularly helpful when your dog is constipated.

And of course, just like other human foods, cucumbers can also be easily added to your pup’s regular dog food, or you can simply give them these juicy treats directly.

Whenever you’re offering these treats to your dog, don’t forget to wash cucumbers first, remove the seeds and peel off the cucumber skin as these parts can be upsetting to your dog’s stomach.

Is Feeding Cucumbers Safe for Dogs?

With all of the nutrients and health benefits that canines can get from eating cucumbers, it’s clear that these refreshing treats are a must-have addition to your dog’s diet.

However, when introducing cucumbers to your dog, do so as you would with any new food – start by giving small quantities, and don’t forget to observe your dog’s reaction after.

And while unpeeled cucumbers are best for us humans so we can maximize the healthy nutrients from these fruits, it’s not the same thing with our dogs.

As mentioned earlier, when your dog eats the seeds and the skin, he may experience stomach upset, which you definitely don’t want to happen.

It’s also not advisable to give your dog too much cucumber as it could lead to overeating and it can even be a choking hazard. Of course, you would not want to give a whole cucumber to your pooch, either as it can also put him at risk for asphyxiation.

You should also avoid giving your dog pickled cucumbers as these contain high amounts of sodium, and we all know that excessive salt is not good for your dog’s health.

Too much sodium in his diet can lead to many health issues including sodium poisoning and kidney problems.

How Much Cucumber Can You Give Your Dog?

Cucumbers are considered healthy treats for dogs. And as recommended by the vets, the general rule with dog treats is to follow the 10% rule.

This means that the total treats that a dog can have in a day should only be 10% of his recommended daily caloric intake.

So, this can vary from one dog to another depending on their size, activity level, and overall state of health.

Hence, a healthy Chihuahua can have a slender cucumber during a hot day, while a German shepherd can have as much as one scoop of frozen cucumber cubes.

Yes, dogs can eat raw cucumbers. In fact, dogs prefer a raw cucumber to a cooked one because of its crunchiness. And it’s also healthier since raw cucumbers retain all of the nutrients that they can offer.

How to Serve Cucumbers for Dogs to Eat?

Your dog can enjoy cucumbers in several ways, but as always, never add seasoning or mix it with other toxic ingredients such as garlic and onions.

To help facilitate smoother digestion, it would be best to cut cucumber first into manageable pieces. This would also help prevent choking, especially if your dog loves to wolf down on his food.

You can also pump up cucumber’s refreshing flavor and hydrating effect by putting some slices or chunks inside the freezer.

Once they are frozen, you can serve the cold tasty treats to your adult dog, and they can also serve as a teething treat to your puppy.

It might not be popular for many dogs, but once they try it they would also love munching on a dehydrated slice of cucumber.

And of course, you can also chop the cucumber into small cubes and add them as toppings to your pup’s favorite dog food.

Dogs can eat cucumbers in moderation, just like with other foods designed for human consumption, and other dog treats.  However, make sure to stay away from pickled cucumbers, and avoid mixing them with dairy products.

It’s also best to give chopped cucumbers to your dog to avoid choking. And of course, always keep an eye on toxic ingredients such as garlic, onions, and xylitol (artificial sweetener).

Trying to add more flavor to the cucumber before giving it to your beloved buddy? Search no more, below are easy to do cucumber-based recipes that we have compiled just for you. Enjoy! 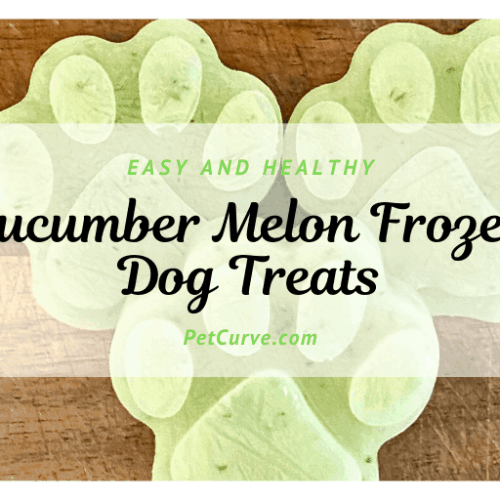 Honeydew can be subbed with seedless watermelon or cantaloupe. 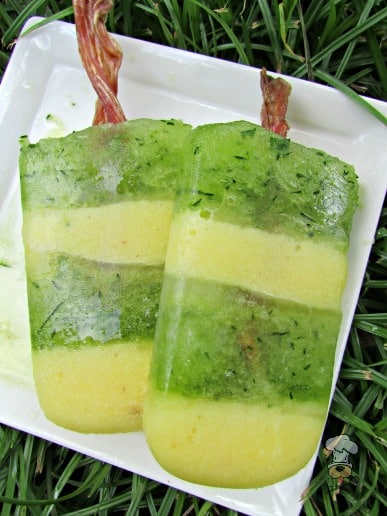 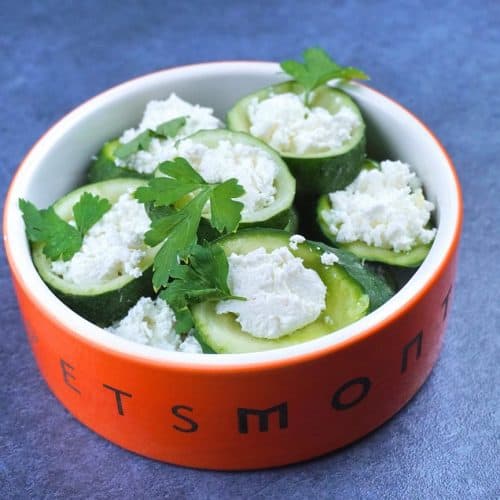 Can dogs eat the skin of a cucumber?

The skin and seeds of a cucumber can be upsetting to a dog's stomach, so removing those items could help a more sensitive dog enjoy this veggie. Chomping on whole cucumbers can be a choking hazard. If your dog likes to wolf down her food, chop the veggies into a manageable size.

Does cucumber cause diarrhea in dogs?

The high water and fiber content in cucumbers can cause gastrointestinal upsets like gas or diarrhea if your dog eats too much. If your dog has a sensitive stomach, you might see a tummy ache when your dog first tries cucumber or eats too much.

There are two potential risks of feeding cucumbers to dogs: overeating and choking. Feeding your dog too many cucumbers won't cause serious damage in most cases, but eating too much of any food item can cause gastrointestinal (GI) upset in dogs, especially if it is a new food your dog has not eaten before.

How much cucumber can I give my dog?

Cucumbers are relatively low-calorie (12 calories in one cup of skinned slices), so it's not easy to overdo it with the healthy treat. But keep it a treat, and don't fill up your dog on cucumbers or any other human foods. Many veterinarians recommend feeding 10 percent or less of your dog's daily calories as treats.